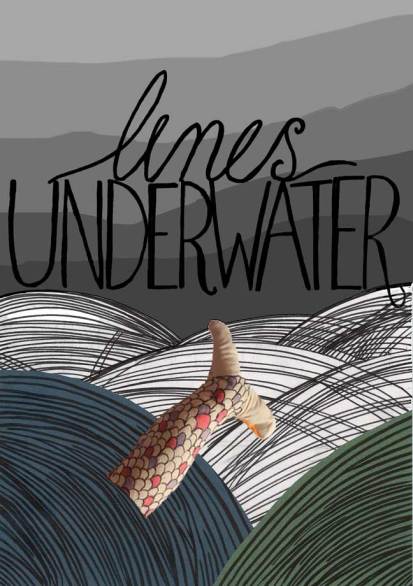 LINES UNDERWATER is a mermaid anthology exploring mermaid myths in the modern world and creating new ones. Featuring artworks, writing and audio from over 40 contributors, here are tales of botched cosmetic surgery, 1950s glamour girls, mermaid chairs and singing sirens, postcards from Jenny Hanivers and memories of love affairs in the navy. Edited by Laura Seymour & Kirsten Tambling

“…this is a long way from the somewhat clichéd traditional view of a mermaid as an enchanting woman with a fish tail. Lines Underwater is by turns playful, thought-provoking and above all packed with original work.” – Caroline Davies, Sabotage

“A beautiful, mesmeric piece of work … there are no low points here. Here is a space that explores the grotesque, amusing and heartbreaking aspects of mermaids, as well as the fairytale portrayals we’re all so familiar with.

“Take a deep breath and jump in.” – Squeamish Bikini

Our brand new full-colour, 52-page anthology is now available for immediate dispatch for £10 + p&p in just one click. Checkout with Paypal below for a safe and secure purchase.
If you’d prefer an alternative method of payment (such as a cheque), feel free to get in touch at poemsunderwater @t gmail dot com.

When will my order arrive?

We are super-fast when it comes to posting orders. We will post your order the same day if you order by 5pm, and early the next morning for orders placed after 5pm.

Are you based outside the UK?

If you’re based abroad, we’re happy to ship to you but p&p is probably a little bit more than it is within the UK – please email your location to poemsunderwater @t gmail dot com and we’ll figure out how much this is likely to be.

Thank you very much for purchasing ‘Lines Underwater’, we hope you enjoy it. We’d love it if you could let us know what you think of the book, either by commenting here, sending us an email, or leaving us a comment on our Facebook, Twitter, or Goodreads pages. This is an independently published anthology, and we appreciate your support!

Thank  you to everyone who’s been involved in our project, by coming over to our website and submitting work to us. Thanks, too, to people who took the time to let us interview them and gave us comments about mermaids and their doings, especially Susan Wicks, Leo Geyer, and Martin Kratz. 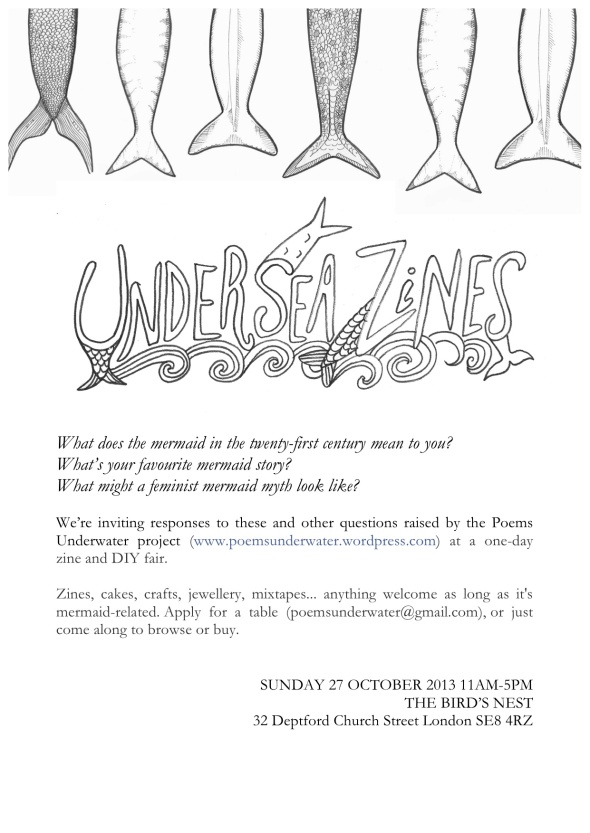 As part of our residency at the Undercurrents Gallery throughout October, we’ll be hosting a zine and DIY fair open to all and free entry.

We have a limited number of tables available for artists or zine-makers who want to sell their work during the day. If you’d like a spot, please send some mermaid-related samples to poemsunderwater @t gmail.com.

We’re also inviting people to come along and bring their own work to swap or share. As long as it’s mermaid-related, we’d love to see it.

You can also find out more and join the event on our Facebook page.

Christopher Brown’s photograph Mer Bench  has just been published in Lines Underwater, our anthology of new artwork and writing that re-envisions mermaid myths for the twenty-first century. One of several works in the anthology that brings the mermaid into the city (another is Kate Noakes’ beautiful poem Melusine at Chatelet which you will have to buy the anthology to read!), Mer Bench will form part of a month-long exhibition of some of the artworks from our project at London’s Undercurrents gallery this October.

The Starbucks symbol, a melusine, is perhaps today’s most commonly-seen mermaid. In Mer Bench, a coffee-cup lid has become mere detritus: a very unfortunate twenty-first century mermaid indeed. For us, the froth in the photograph evoked the myth that, having no souls, mermaids turn into unhallowed froth when they die.  It looked to us as if the frothy mermaid had exceeded, and burst out of, her mass-produced Starbucks container!

However, it is the bench that is the true mermaid in this picture. Christopher Brown is one of the only people in the world to have witnessed the activities of a Mer Bench, as he explains in his artist’s statement below.

“Mermaids tend to live at sea, but Mer Benches are equally at ease in seawater or freshwater (think of them, in that sense, as bi-curious). At night they scuttle off in the water, where they rid themselves of the memories of having been sat on, before returning to their former positions by sunrise.

“Mer Bench is one in a series of photos I took in late 2006, around the lake in central Geneva. It was a chilly, wet morning, so there were very few people about. The exceptionally strong winds meant that the iconic Jet d’Eau had been turned off, and I remember feeling exhilarated as I explored the empty jetties, promenades and playgrounds.

“My gloves were too thick to operate the camera properly, so I had to remove them every time I took a photo. As a result of the bitter cold, my hands were soon red and sore.

“Mer Bench came into being after the wind blew some waves over the promenade, which washed up against a nearby bench, spitting up a coffee-cup lid in the process.

“After I had taken the photo, a peculiar thing happened. In broad daylight, the bench got up, stretched its legs, then headed into the lake for a swim.

“Like me, it must have thought there was nobody else around.”

Christopher Brown is a film director and screenwriter. His feature project ‘Knock-Out’ recently won Best Screenplay at the London Independent Film Festival, and the Cordelia Award for Best UK Screenplay at the LA-based BlueCat contest. His latest short film ‘Remission’ is forthcoming in the autumn. Chris lectures in filmmaking at the University of Greenwich and has published articles in Film Criticism and the Quarterly Review of Film & Video.

Christopher has also donated four more photographs he took on that windy day to our digital collection of mermaid artworks. You can enjoy them below, and check out our online gallery for even more fantastic responses to the project. 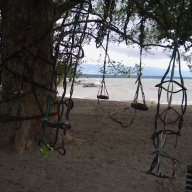 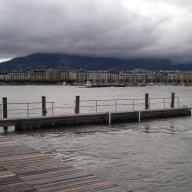 Katie Hale – How to Kill a Mermaid

How to Kill a Mermaid

To split her tail, you take her fins and pull.

(There is no blood, but the smell

of rotting fish, and saltwater stinging

Put her on the land

and make her dance, shedding scales

and stumbling, undressing her skin:

fingers wrinkled into fists against her eyes,

and tie her wrists

then push the girl away, and watch her

hobble back towards the sea and drown.

Born in Cumbria, Katie Hale is the founder of poetry project ‘[insert text here]’ (sic). Her work has been published in Poetry Review, The Frogmore Papers and Cadaverine, among others. She is currently studying for an MLitt in Creative Writing at the University of St Andrews, and working on her debut pamphlet. More at: noordinaryblog.wordpress.com

Katie has written another mermaid-related poem, Siren Song, which you can read soon! She said of it:

My writing process various from poem to poem. Where the raw idea originates is nearly always a mystery to me, but the finished piece usually ends up a couple of steps removed from that initial thought anyway. This particular piece presented its own challenges because of the rhyme. In some ways, this limited what I could say, but it was also a generative process: if there’s something you want to say that won’t fit the rhyme scheme, you either have to find a different way to express it, or say something different. This element of rhyme was key to the creation of this poem, and is something I’m being drawn to more and more – it forces me not only to think outside the box, but to examine the box from every angle as well.

The pool is my palace, the pool is my place, safe place, haven place. Loved up place, love locked down place. Desert park place, the river heart place. Never mind place, muck about place. NO DIVING, NO RUNNING, NO BOMBING, NO JUMPING

I can see, that quickly there have appeared a maze of walls to start at defeating us, and water barriers to keep us from the world, sheltering us in artificial cover. I give you moss, you give me moss, and we feed like peasants.  There is fencing everywhere ‘for the people’, but maybe there is shrubbery too, somewhere, greenery and fields full of food. Flood the gates! Imaginary landscapes! So far, I can only recall the concrete ships,  factories and stones that skip and stop too early at the doom of a day up too soon, in the cold, severely unhappy. But you know more than me. Can you see the aqua in my eyes? Can you see the leaves? Can you see the fishies?In conflict, in apathy, with mild traces of greenery… we say it to ourselves, daily (in meditation) ‘we must begin to live,  w e   m u s t   learn how to live.’
……………………………………………………………………………………………………………………………………………………………………………………………………………………..
On the tongue is another night of medicinal fodder, a damp awakening on a half camp, a fake rural setting, with a tormented wind swept ambition; to get up and go, to make a meal of it, to make a master of oneself.
______________
Cheri Allcock graduated with a bachelors degree in Art History & Fine Art from Goldsmiths College in London, she now lives and works in Cairo.
She says that her writing process is often quite ‘free flow’ and usually stems  from some visual stimulus which then develops and (she says) writes itself in words.  The pieces exist aurally as brief moments destined to pass. Repeating, pausing and falling they are almost always intended to be ‘said and not read’.
You can read two more of Cheri’s poems in the anthology

We’ve been interviewed on Squeamish Bikini, giving a a bit of background to the project and hopes for how it might develop. Have a look!

© Laura Seymour and Kirsten Tambling 2013. Unauthorized use and/or duplication of this material without express and written permission from this blog’s authors is strictly prohibited.

If you like Poems Underwater, why not become part of it? Please consider donating to help us print up our zine...